Propelling the Future of Flight with Hexcel Composites

Since 1946, Hexcel advanced composites have been helping to propel the future of flight by reducing the weight of aerospace structures while maintaining their strength. Back then, aircraft were made primarily of metal alloys, which were extremely heavy, noisy, corrosive and required extensive amounts of maintenance making them less efficient than modern solutions for flight. The aerospace industry has steadily been adopting composite materials into their designs to achieve lighter solutions with the same strength of metal alloy counterparts yet with many added benefits such as corrosion resistance, lower required maintenance, advanced sound attenuation (noise reduction), greater design freedom and longer life spans. Since 1987, the use of composites in the aerospace industry has doubled every five years to the point now where many newer aircraft are made with more than 50% composite materials, such as the A350 XWB and the Boeing 777X.

Hexcel composite materials are found in the engines and nacelles, wings and tail assemblies, fuselage, window frames, doors, flooring, paneling and so much more in today’s commercial aircraft. Aircraft such as the A350 and A320neo, and the Boeing 787 Dreamliner, 737 MAX and newest 777X are among those realizing the potential of increased use of composites. These aircraft are not only lighter and more durable than their predecessors, but more fuel efficient as well.

In 2008, Hexcel was awarded a contract to supply carbon fiber prepreg for all the A350 XWB composite primary structures. It was the largest contract in the company’s history. Hexcel’s experience in intermediate modulus carbon fibers was used to design HexTow® IMA to Airbus requirements. The HexPly® M21E prepreg resin matrix was developed by Hexcel chemists to ensure that the very high performance properties in the fiber are fully optimized in the cured prepreg laminates. The A350 XWB composite structures built by Airbus and the Tier 1s using HexPly® M21E/IMA include entire fuselage panels, keel beam, the entire wing (covers, spars and center wing-box) and empennage. The A350 XWB lower wing covers are the biggest single civil aviation parts ever made from carbon fiber, measuring 32 meters long by 6 meters wide.

Hexcel’s composite materials are used extensively to deliver superior strength, stiffness and weight-savings on the Boeing 787 Dreamliner. The 787 Dreamliner was the first commercial passenger aircraft designed with advanced composite materials for the wing, fuselage and empennage primary structure. Hexcel’s carbon fiber, structural prepregs, reinforcing fabrics, honeycomb core and engineered parts are used in many applications throughout the 787, particularly in the aircraft’s engines and nacelles, interiors and secondary structures.

Nacelle manufacturers were the first to adopt significant amounts of composite materials. By the 1970s, designers had turned to composites for the weight savings necessary for the large nacelles required by the new generation of large high power turbofans. Today’s nacelles are made primarily from a variety of composite materials rather than metals not only to save weight, but also to provide superior sound protection and the benefits of lower maintenance. Composite materials made from carbon and glass fibers, aramid papers and high temperature resins have revolutionized the way the modern nacelle is constructed. Carbon fiber epoxy prepregs account for typically half the volume of the entire nacelle structure including the inlet cowl, fan cowl, and thrust reverser. Toughened epoxy prepregs, such as Hexcel’s HexPly® 8552 and HexPly® M91 epoxy matrices, are recommended for structural applications which require high strength, stiffness, and impact tolerance.

The greatest advancement in recent years has been the successful implementation of the carbon fiber fan blade on a turbofan engine. The industry standard has long been titanium fan blades which are strong and, for the most part, corrosion resistant. Titanium blades require a complex layup and fusion manufacturing solution. Perhaps the greatest downfall of these blades is their weight and the difficulty to repair them, which equates to higher fuel and maintenance costs. Carbon fiber blades offer a lighter solution to save on fuel as well as a greatly decreased maintenance needs while high toughness resin systems meet impact requirements.

In the 1990s, the GE90, which powers the Boeing 777 airliner, was the first commercial turbofan engine to successfully implement epoxy/carbon composite fan blades. With carbon fiber blades, GE was able to reduce the number of blades from 36 to 22 thus reducing the overall engine weight significantly. The impact resistance of these composite blades was proven over the next 15 years having endured more than 180 bird strikes with only one blade being unserviceable. Hexcel’s advanced toughened HexPly® 8551-7 epoxy matrix is the only qualified system for the GE90 program. 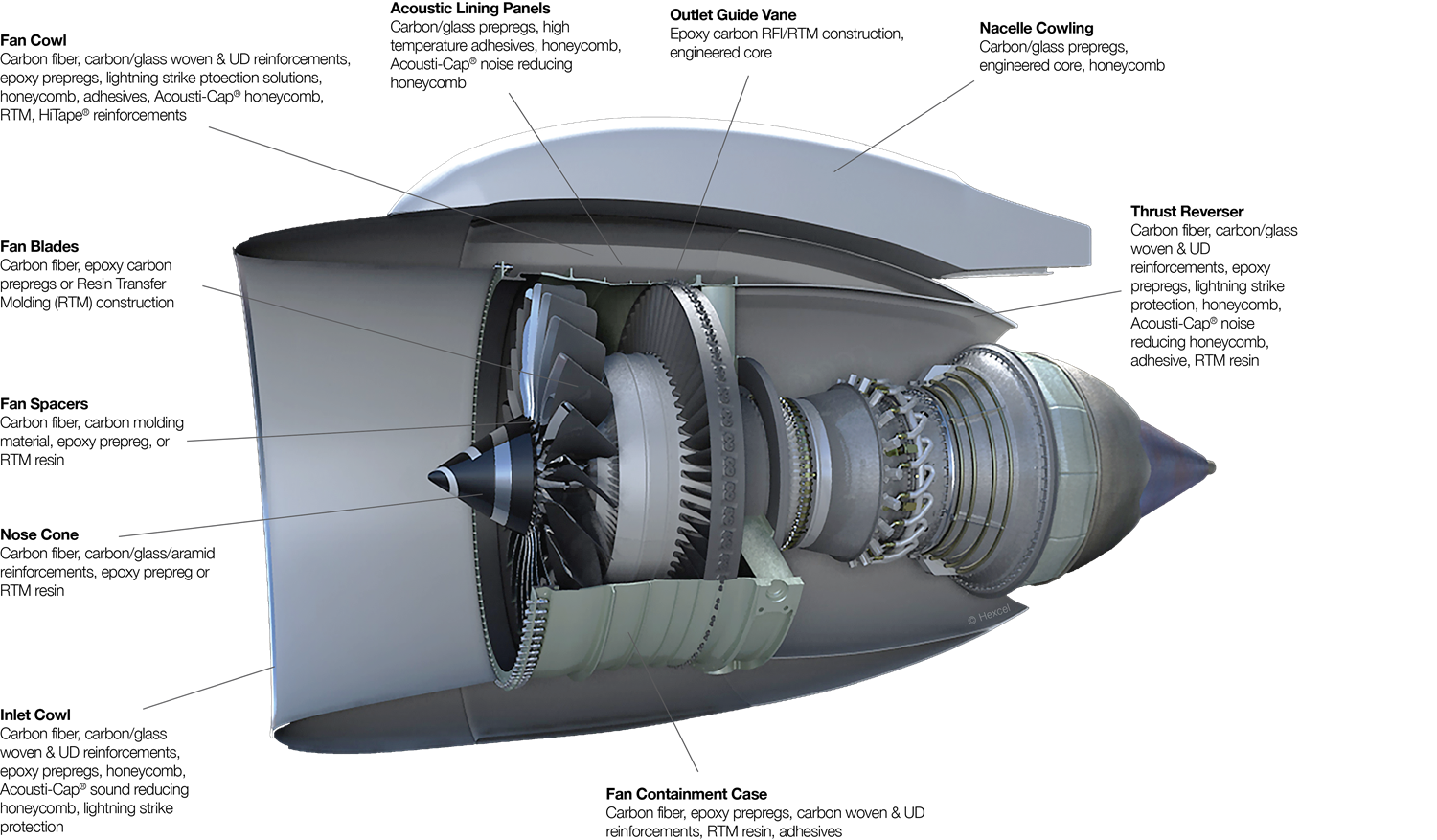 The LEAP-1 engine developed by CFM International (a joint venture between GE Aviation and Snecma) is one of the first single-aisle aircraft engines to use a composite fan. The fan blades on this engine are built by 3D weaving Hexcel’s HexTow® carbon fiber and then injecting this with a resin transfer molding (RTM) resin. This new 3D-woven RTM technology not only reduces the weight of the fan module (about 500 pounds per engine), but also enables blade geometries that are challenging to produce with titanium. These fan blades are highly impact resistant and said to be so durable that they will have no life limits and will be maintenance free.

Other components within the engine, such as fan casing, outer guide vanes, platforms and fairings, are also converting to composites.

Honeycomb core is a material that provides added stiffness and strength to sandwich structures with virtually no added weight. Honeycomb for aerospace is made of a variety of materials including fiberglass, carbon, aluminum and aramid mechanical papers. In addition to its structural properties, honeycomb is an efficient energy absorber which can be used for airflow control, sound attenuation and dielectric applications. Honeycomb is used as an inner structural material within most components of nacelles including the inlet, fan cowl assembly, thrust reverser and acoustic liners. Hexcel was the first company to manufacture honeycomb on a commercial scale more than 50 years ago, and the company continues to innovate by adding functionality to core products. Major nacelle manufacturers around the world design their components using Hexcel’s HexWeb® HRH-10, HRH-36, CR-PAA and HRP cores.

In recent years, a revolutionary advancement to honeycomb, Hexcel’s HexWeb® Acousti-Cap® noise reducing honeycomb, has enabled aircraft engine designers to achieve superior acoustical performance, including dramatic noise reduction during takeoff and landing without a structural weight penalty. This advanced honeycomb material consists of a permeable cap material embedded into a honeycomb core to create an acoustic septum. Rather than sandwiching this acoustic septum between separate sheets of honeycomb, Acousti-Cap® honeycomb is created by inserting a permeable cap into each individual cell of a single honeycomb sheet. This enables designers to keep the panel structure simple and consistent from an acoustic absorption perspective. Another key feature of the HexWeb® Acousti-Cap® product is the ability to seam the various honeycomb segments forming the blanket using a technology that keeps the seam invisible acoustically. This has been shown to have a significant noise reduction benefit on all engines using it.  For the end user, this equates to lower landing fees at airports, improved cabin comfort and a reduction in other acoustic treatments which in turn lowers weight and costs.